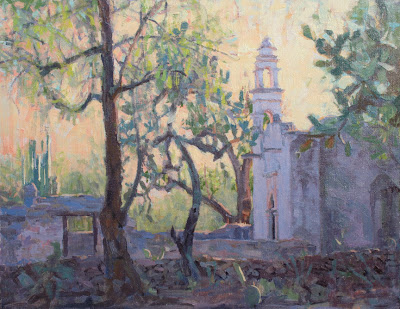 I started this painting in December, but got working on other things and never finished it up until now. I started with the idea that this would be mostly low (dark) values, but to get the light effect I wanted there had to be some higher (light) values thrown in here and there.
It was a difficult painting for me. I strayed from the original plan a bit, but sometimes you just have to be willing to go where the painting is taking you. The focus is on the church and the fading afternoon light, but the tree and cacti in the foreground are important to the setting too. I painted just enough detail so you would get the feeling of looking through them, but not get caught up in them. There are lots of horizontals and opposing verticals, and then the contrast of the organic vs. man made structure. It ended up being a complicated piece.
Posted by Frank Gardner at Monday, January 14, 2008

Those purples on the building are to die for! Beautiful painting.

Gosh the atmosphere in this painting is so lovely, so real, and very inviting. I love where you place the viewer, you really feel a part of the scene.

Wow! I love the luminous shadowy purple whites of the building. The compositional idea of drawing the eye through the tangled trees in the fore ground works perfectly. I have an intense sense of being there and of a unique light.

I appreciate you stopping by Stacey. I pushed the yellow/ orange color in the sky a bit to get those purples and blues to pop.

Thanks Ambera. I worked hard at getting it just right for those feelings that you mentioned. I took some liberties with the light so I am glad to know that it looks real to you. I think the color choices and the foreground trees kind of sheltering the viewer help make it inviting.

The trees were the hard part Eric. To get enough for the sense of place, but not too much to block you out or take away from the church.
Thanks for your thoughts as always.

I can see where this one was tuff, Frank. Lotsa places to get caught in. You pulled it through though. I dig the orangish light against that grayed voilet.

I'm glad to hear those colors work for you Mike. They are not my usual choices to work with, but kind of the focus of this painting.

Hi Frank,
When I squint I see three values something I strive for in plein air is 3/4 values. Powerful vertical design with the forground tree. Love it!

Thanks Jennifer. I was going for a limited value range in this one. I'm glad that you noticed.
Your work is great. I had not seen it before. I'll be visiting your blog more.

This is one of my favorites, too...
Such an inviting group of colors and light and welcoming shadows...so serene.

Recently, I directed a local pastor, who uses the narthex (is that the correct term for a church "lobby"???) of his church as a paintings gallery, to your sites, hoping he would be inspired to purchase or show (or something, however that works) some or many of your paintings of churches/thorns/stalks/sowers/reapers. He went on vacation in the meantime. And, I'm not sure if he would reach out of the local area for artists....but, it was worth a try. I think it would make for a stunning show. My humble opinion.