This is a demo that I did for the class this morning. I wanted to show how I would block in the main value masses quickly to get the design down before the shadows shift too much. The photo below is the scene a few minutes before I started. You can see how the line of sun on the ground in from of the chapel is still there. By the time I started blocking in, the sun had moved toward me, making the shadow from the tree move a bit. I like it better as a more solid shape.
I probably spent an hour doing this demo while talking and explaining what I was doing and taking a quick break.
It is important to block in all of the light and shadow before the light shifts. If you wait and tackle it one piece at a time the shadows will be inconsistent throughout the painting. 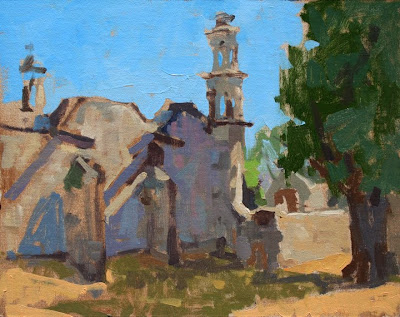 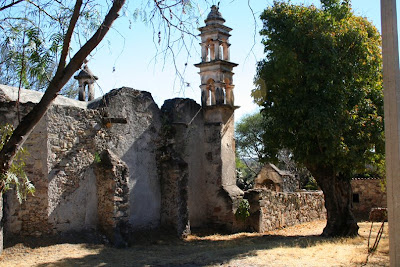 
I'll post more about the class as I have time.
Posted by Frank Gardner at Wednesday, February 25, 2009 25 comments:

These are two studio paintings that I did around Christmas. I left them hanging when my Mom passed away in early January and never got around to getting photos and posting them.

It's fun sometimes to try several approaches on a theme. To play with different ideas without trying to cram it all into one piece.
Here I was playing with a similar subject and colors but with different approaches and designs. For example, the top one has a big mass of the tree on the left and the bottom piece has the large mass of the tree on the right. The road painting has some visible sky and the field painting does not.
The road leads the viewer into the painting on the top, which is a pretty standard way to lead the viewer into a painting. In the bottom one, I tried to lead the viewer in with just color and brushwork. I am hoping that the eye is attracted to the area of the branches on the right and beyond into the field. Then, over to the far tree on the left and into the foreground again by the light pink flowers on the left. I am curious to hear if that is the path that others eyes are drawn to in that piece. 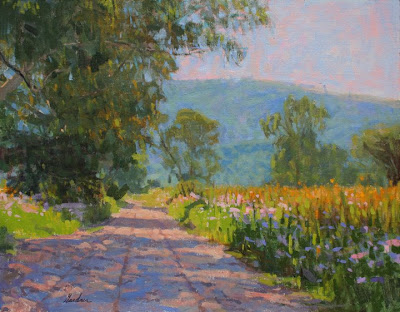 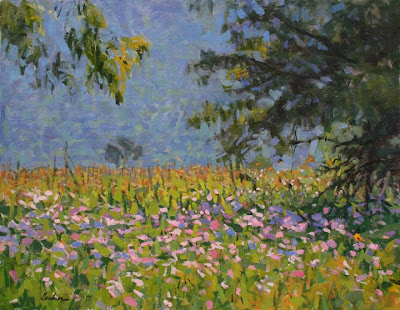 This is a demo painting that I did for a small class back in September.
Colors were first pre mixed into about 9 or 10 main piles on my palette. That way I could compare the colors to each other and make some adjustments.

Then I blocked in the main shapes in Step 1 to show my students how to quickly build up the masses first with no modeling.
The goal was to just paint a flat shape of each pre mixed color.
We were all painting from the same photo and compared as we went along. 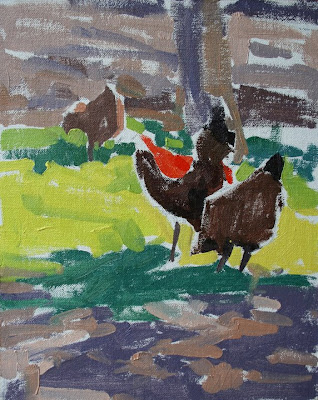 
Step 2. Once the canvas was pretty well covered, I started to adjust the shapes to get a more accurate drawing.
The focal point is around the rooster, so I started adding smaller shapes there first to define that area.
The hen in the back is not in the focal area, so I left that one rather vague. The silhouette is what describes to the viewer what it is. 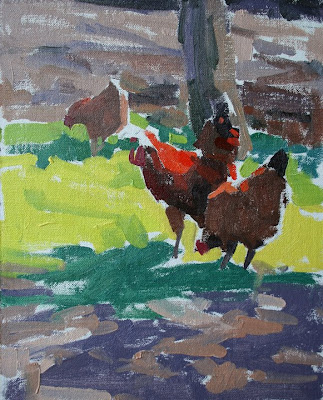 
Step 3. I wanted to maintain simple shapes throughout the painting without breaking them up too much. I tried to add just enough detail to the alfalfa on the ground so you can tell that there is something there.
I was working all over the painting at once trying to unify the design without overworking any one area. 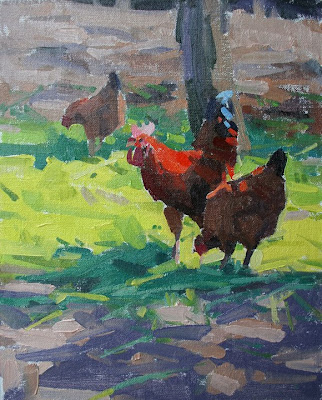 
One thing that I like to do often is have a few brush strokes of a light value break into a darker mass, and in the same area, put a few strokes of a darker color into a light mass. I think that helps in the transitions from one mass to another. You can see it well around the rooster's head with the green in light and shadow. Those strokes are similar in size to the blue and orange on the tail feathers. There are also two similar strokes of dark green by the rooster's front leg or behind the hen's tail. Similar sized strokes like that help move the eye from one spot to the other. adding vitality to the painting. For this painting I wanted to keep your eye popping around a bit, kind of like the action of the rooster and hens pecking around in the alfalfa.
Posted by Frank Gardner at Thursday, February 05, 2009 27 comments: