One Year of My Paint Box

Today is the one year anniversary of My Paint Box.
I didn't know what to expect when I started this blog on Oct. 30th, 2007.
Now, one year later, blogging seems to come naturally to me.

I want to thank everyone who visits. Especially those who take the time to leave a comment. That way I know you are out there. Knowing that there are readers makes the whole blogging experience much more rewarding.

I'd like to share this new painting with you as a special thanks. I really like how it came out.
This one is hot off the easel. Well, actually, it is still on the easel.
I may change the title one I have time to think about it a bit. 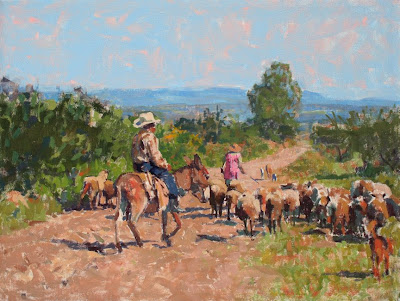 
One of the reasons that I started writing the blog was a line from the Kevin Macpherson book "Landscape Painting Inside and Out" where he suggested writing about your art as a way to take it one step further.
Blogging seemed like a good way to write about my art and share what I wrote instead of having it on scraps of paper strewn around my studio. It gives a sort of accountability for what I paint and write knowing that someone is looking and reading. The feedback and discussion can be real insightful sometimes.

I did not fathom the scope of the blogging community when I started My Paint Box.
My Paint Box has expanded beyond just writing about my art, and has become a group of friends.
I have "met" a lot of great artists and great people over the past year through my blog and by reading and commenting on other's blogs. People that I probably would never have met otherwise. Not just painters, but illustrators, writers, photographers, and just plain old bloggers and blog readers. My world has certainly expanded a bit because of all of you.
My virtual friends.
I joke sometimes that you all probably don't exist and your comments are just computer generated responses to my ramblings. Like a bizarre version of "The Truman Show" or something.

Luckily, I have met some of you, own some of your art, received signed and doodled copies of latest books from others, and have plans to meet a few others before long. Hmmm. didn't they insert characters into "The Truman Show" to keep him believing?

Well, either way it has been fun.
So...
"Good morning, and in case I don't see ya, good afternoon, good evening, and good night!"
Jim Carey from "The Truman Show".
Posted by Frank Gardner at Thursday, October 30, 2008 60 comments:

Here are two recent paintings from here in Mexico lest anyone think that I have moved to Maine or anything.
Both of these were done on location this month.
The color in the landscape is starting to turn, but there are still pockets of flowers hanging on here and there. 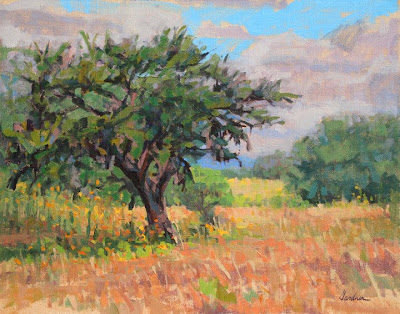 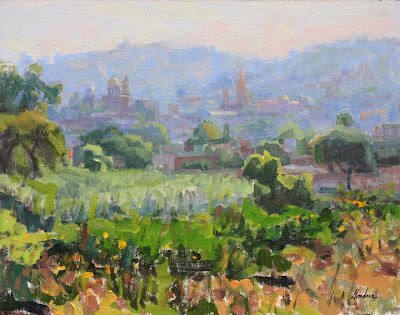 
A friend of mine, Jack Riddle, is in town and we have gone painting together a few times. Some of you know Jack from his blog and may have been wondering if he actually made it down. Here is a picture of him painting the other day at a friend's ranch. 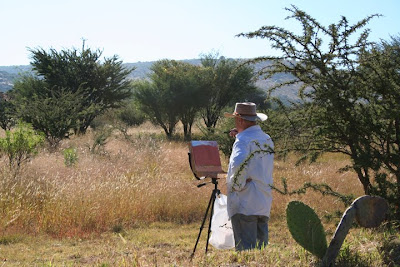 A few more from Maine

Here are three more paintings from the trip to Maine.
These were painted mostly on location with a few adjustments back in the studio.

I don't have a lot of time to write much about these right now, but I wanted to get some more of these paintings on the blog. 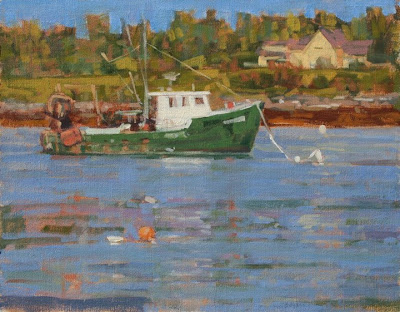 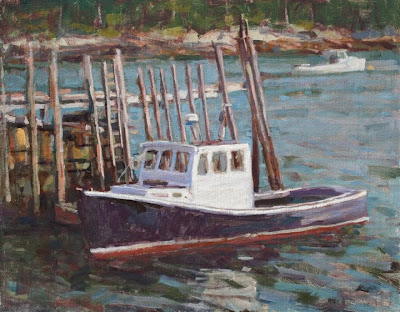 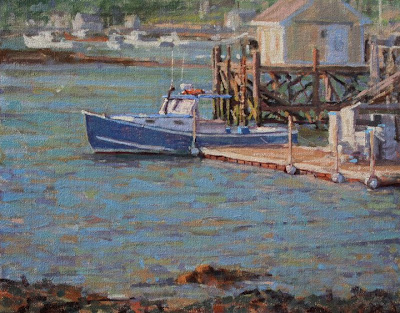 The Landscape Workshop for March 9th through 13th, 2009 has been full for a few weeks now.
I thought that I should mention that here as I am still getting emails about it.

I am planning one other 5 day workshop for either Feb. or Mar. 2009, and I will be sure to post about it as soon as the dates are set.
Posted by Frank Gardner at Wednesday, October 22, 2008 4 comments:

Painting in the rain

You don't always get beautiful weather for painting.
However, if you travel this far to paint, YOU PAINT!

Our first day of painting was the only rainy day we had. Luckily I had just gotten an new Umbrella set up from Artwork Essentials.

Peter and I found Colin painting in the parking lot for the ferry to Monhegan and decided to set up next to him in the rain.
We were getting some blowing rain on our palettes, but it was not too bad that we could not go on. 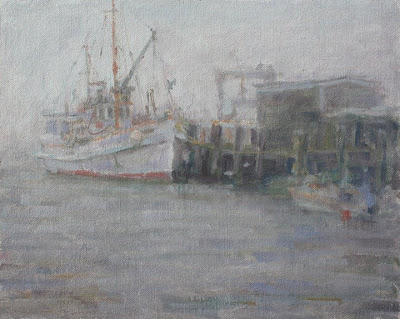 
The Laura B is one of the ferries that run from Port Clyde to Monhegan Island.
The misty fog on this rainy morning made for a real nice effect. I painted on this one until the fog lifted quickly and the scene changed so drastically that we could not go on. There were boats moored and an Island behind the boat and pier.
I put a few finishing touches on this one here in the studio, but it is pretty much the same as I came home with.
One thing I notice is that I make the cabins on my boats too tall. I adjusted this one down with the aid of a photo reference.


I was painting right along the water's edge and it was cold.
I know.
FYI, the EasyL umbrella comes with a little chord that you tie to the umbrella part and the extension arm part. The umbrella part is made so it can blow off in a gust and not knock over your whole set up.
That is a REALLY good idea.
Trouble is, I did not think that I needed to do that and this being my first day using the umbrella, it blew up and off, did a couple of rolls, and landed in the water. I quickly stepped in before it had a chance to drift too far away. Then I tied it on like it is supposed to be.

Since I was talking about umbrella set ups the other day. Here are some shots of umbrellas that some of the other painters had. 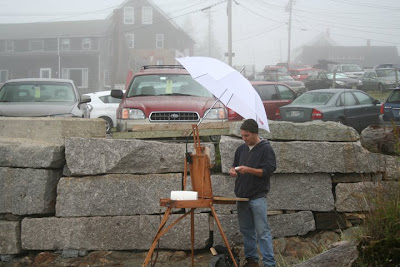 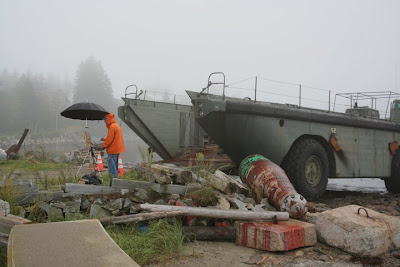 Colin Page painting a house in the rain with his umbrella set up and his nifty landing vehicle that he uses to go plein air painting along the coast. 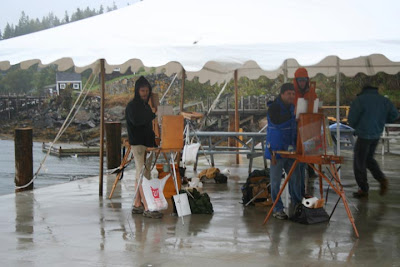 Eric Merrell, Peter Kalill and Colin Page under the tent


After abandoning our first location we took shelter in a tent left over from a party the night before. It was on a dock at the co op pier and had a few good views. I think there were 8 of us painting under there at one point.
The wind was whipping the rain around and I don't think it really kept any of us very dry.

I may post my painting from under the tent another day. I am still thinking about a few things.

That evening many of us had not had enough frustration, so we set up on the front porch of the house we rented and painted off into the woods. That piece is almost a complete failure, but you never know what might happen to it. I wish I had taken a photo of the scene I was painting, it would have improved my options on that one. 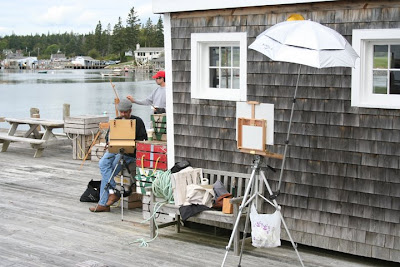 Jerome Greene sitting, Paul Schulenburg with the red cap, and my new EasyL Lite paint box and my EasyL umbrella.


I like this umbrella a lot. It is tall, so I can get it up and away from my face when I need to. I like the silver on the outside and black on the underside. That is a real plus in the strong Mexican sun because it helps cut down on the glare. It is the only umbrella I have ever used. So I can't really judge for sure.
Several of the other painters said they liked it better than the ones they had.
I had never used an umbrella before, but it really helped out a lot. I was always twisting my set up around trying to get the palette and painting in the same light. Now I can just set up where I want.

I added these new shots of the umbrella broken down and the clamp. The strong clamp really sets it apart from some of the other umbrellas I've seen. 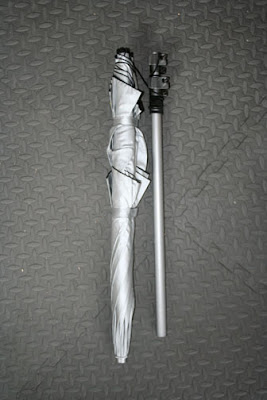 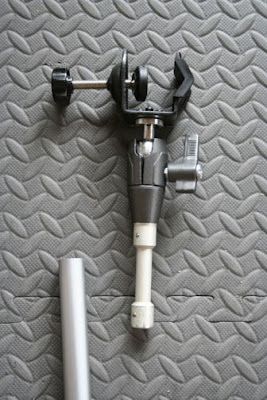 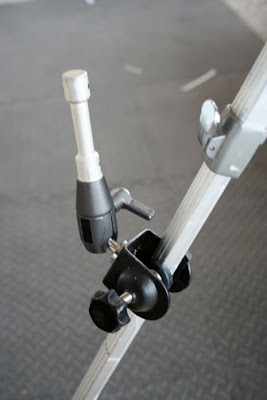 This is the piece that I was painting If you happened to notice the two seconds that I was in Jeremy's video.
The light on Eric and his set up that afternoon was great.
I adjusted a few things even though I did not have a very good reference shot to work from. I thought the color was a little cold, and after seeing the video, I realized that I should warm it up a bit, and get some of the warm grass that the sun was hitting in the foreground.
Here are the two together so you can compare the two and see what I changed. 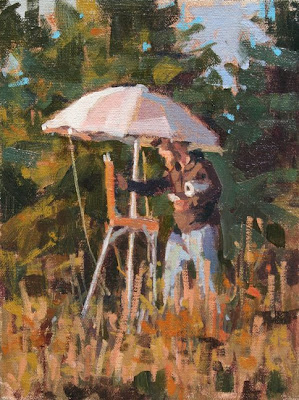 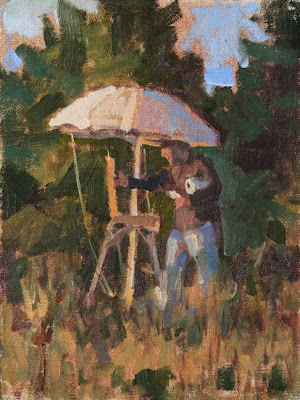 
I also adjusted his face so it looked a little more like Eric.
His gesture is pretty much right on and that was not really altered.
The two areas of sky were confusing, so I lessened one of them.

Below is a detail of his face and arms. I was after the way he holds the brush and that roll of paper towels under his arm. 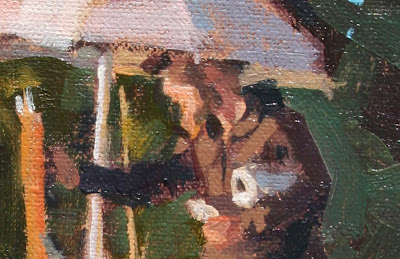 
Eric has a great umbrella that he works under. It is white with a black layer on the underside. It sticks in the ground, so it is independent of the easel and It can be tethered down with ropes if it is windy. 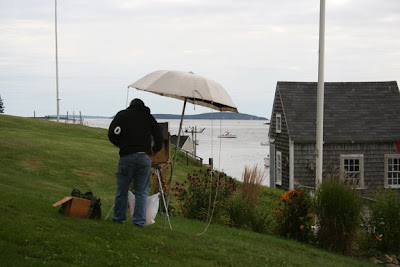 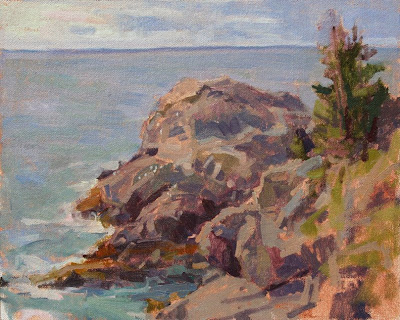 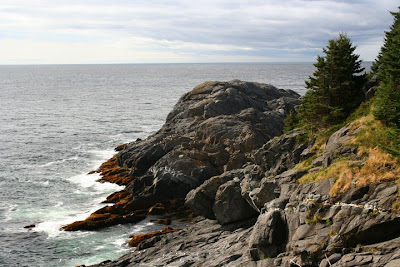 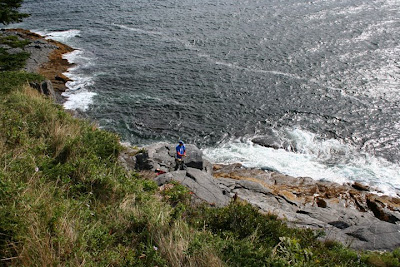 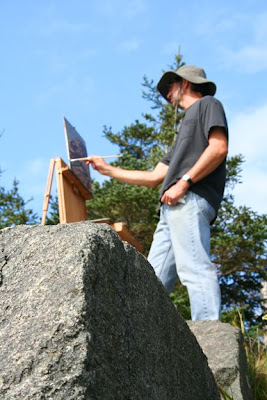 One of my favorite things about getting together and painting with a group of artists is when a bunch of us paint the same subject. This boat house was painted by at least six of us on a couple of different days. Below is my version.
I really like the sky in this one and how it describes the light on that particular day. 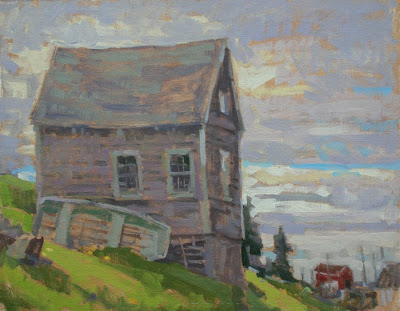