It was one of those frustrating days that plein air painters sometimes have. We had staked out our location the evening before and returned the next morning ready to go. McLoon's Wharf in Spruce Head, is classic Maine, a few little red shacks where lobster boats unload their catch and lots of colorful fishing boats moored in the little harbor. I had visions all these great paintings that I was going to do in my mind. In fact, it was hard to decide which one of these masterpieces I was going to paint first. I settled my sights on one of the red shacks, pier, boat, some water, sprig of land in the background. I was going to get it all.
Well that didn't work, and that is how I got that nice toned canvas on "Second Wind". 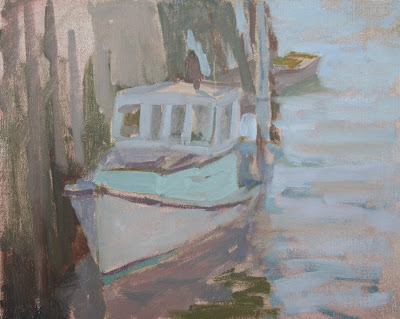 
I realized that my first try of the day was a failed painting after about ten minutes. Maybe five, but I kept hoping for the best for the other five. The positive side here is that I recognized that it was bad from the start and that no amount of picking at it was going to change that. So, I wiped it down and regrouped.
I went for a simpler composition. Instead of trying to get all of Maine into my 8"x 10" painting, I went for one lobster boat that had just pulled in to unload some traps, and just a slice of the pier. It was an old wooden boat, a classic, the kind with the sail in the back. I went at it with gusto after having loosened up with the first try. I blocked in all of the important stuff, got the lines of the boat down, added some pilings of the pier and the little boat that was tied up behind it. Then I worked the reflection of the sky in the water down along the right side.
O.K., now it was time for all the details. Or not, the owner of the boat walked over to have a look. "That's real nice" he said, "you got the shape down just right with so little. Looks just like her. Sorry to tell you this, but I gotta move the boat." I had about three minutes before he got back down into his boat and pulled out. I double checked a few shapes and made sure I had that bow line right and off he went.
I ended up being real happy with the result. I had captured just the important stuff, a good color harmony, and not a lot of fluff that may or may not have added to the piece. I hadn't had time to fuss over it and mess up all the good painting I had done in about fifteen or maybe twenty minutes. The name of the boat was "Second Wind" and I had gotten mine.

That High didn't last long. The rest of the morning continued to frustrate me. I walked around a lot. Checked out my buddies' paintings, snapped some photos. I Really could not decide what to paint next. Have you ever had that feeling? So I decided to do some pencil sketching. Some of them came out pretty nicely. Here are a few pages from my little sketch book. They are loose, just little value studies. I tried to get the gesture of the working men down and the lines of the lobster boats. I don't get to see many of those in Mexico. It really was a pretty good morning after all. 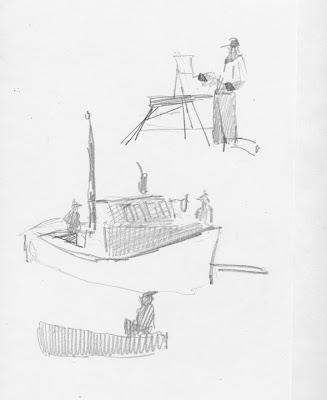 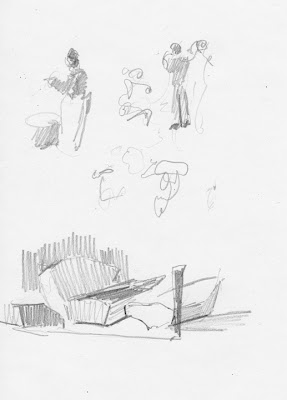 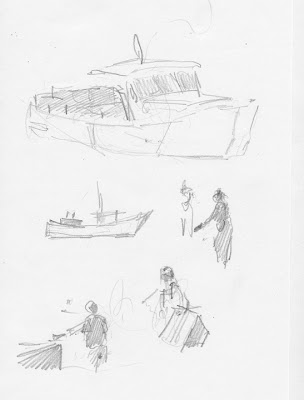 Frank, I know how much your work has grown since you made this post and I had to respond to your rhetorical question, "have you ever felt this way?" Every time, practically ;)
First, whatever drama your looking at is overloading you or NOT resonating with you. Say, the subject matter is more difficult or unfamiliar than what you'd chose if you weren't in a group. Or it just isn't hitting you.
Sometimes it's so hard to settle down and get started then I see everyone getting a good finish and there's where I'm hard on myself if I suck that day. But, lately I've been doing just what you did and going back to my pencil drawing to understand my subject and, duh, it's working. Plus it's makes the session valid for me to at least get something.
Which gets me to my second point. You draw really well which is a pleasure to see. In fact, my eye was drawn to your side link, pencil sketches because I have a pencil sketch that I'm about to post and so I swung over to see yours.
Interestingly, this post relates to your current post in that this sort of overwhelming feeling of trying to find the beauty in your surroundings and make a significant statement out of what you see is ongoing.
What I see, having read your blog for a time is the progress and the struggle just go together. It's what pushes us. Makes sense.
Thanks for letting me be all windy here but, I'm inspired!
Also, I'd better get to the easel as I have a deadline and here I am online. Does that say it all or what?
Hope you are enjoying your vacation!

I love the progress and struggle Mary. That is one thing that makes me know I will never tire of making art nor need to retire from my job. It will be a challenge till the day I die.