Today I painted with colors that were chosen blindly, at random, from a box of paints that I had not used in a long long time. The exercise is suggested by Kevin Macpherson in his book, "Landscape Painting Inside and Out". He suggests setting aside all of the colors that you normally work with, and pick three to five random colors from twenty or thirty tubes of what is left of your paints. I had about twenty in an old paint box. You then have to do a painting with JUST those colors, plus white, no cheating.

Kathryn Law has been doing some paintings like this on her blog here, here and, here. We were swapping comments the other day, and I decided that I would give it a try. I told her I felt like I was about to jump into a lake where I knew the water would be really cold.

The colors I chose were Purple Lake, Magenta, Terre Verte, Chrome Yellow, and Cerulean Blue. I limited myself to five grabs, but one was an un marked tube that contained French Ultramarine Blue, which is a color I use all the time, so it was out. I also chose two tubes of Terra Verte, so I dropped one of those as well.
Gotta give myself some kind of chance you know.
The Terra Verte must have been from the days when I was still looking for the perfect tube of green. I tried em all. They all stink. Throw out your greens and just mix them. Terre Verte is stupid. It has no tinting power at all and I had to put tons of it into my mixes to change anything. Cerulean Blue is not far behind in tinting strength and it is not my favorite blue. My Purple lake was from so long ago that it was very dried up. I could not mix with it. Another one down. There went my darkest dark. Magenta is almost the same color though, not quite as dark and a little redder. It was going to be my "red". Chrome yellow was the lucky draw of all of them. I would have been sunk without it. The white was a given, so there I had my Grab Bag Palette. I was not that excited. 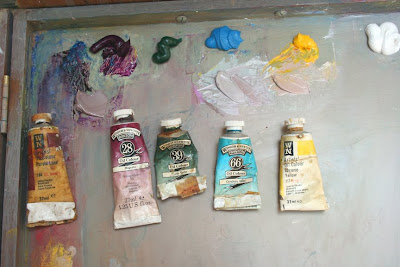 The grab, with piles of gray "mud" that were left over after some practice mixing.

I decided to see what they could do, you know, take them out for a test drive. I just mixed as many colors as I could come up with until my palette was full. Then, for fun, I layed them on a 6x8 board like my "Value Board" that I talked about in this post.
I had a ten step black and white value scale that I made with my workshop painters. The values were arranged along the edge of the board . I tried to line up the colors that I mixed using the new colors, by value, next to what I judged to be the value of each mix. This is actually a valuable exercise on seeing value. I also found that I was able to get a lot of good colors. That water was warming up. 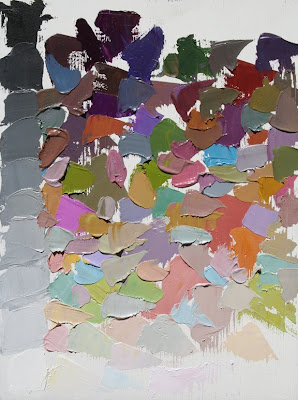 In photoshop, I switched it to black and white to see how I did. There are some that are obviously off, but some were right on.
You may want to open another window and view the two enlargements side by side to compare. I am not an expert in photoshop or I would have put them together for you. 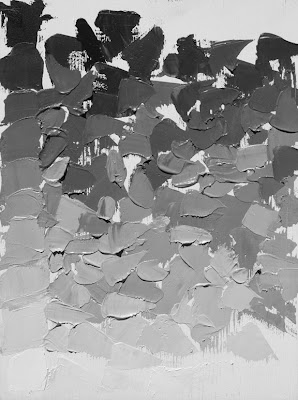 I finished the painting.
I'm working on getting a post together so I can share it with you all.
Posted by Frank Gardner at Thursday, April 03, 2008

Interesting stuff Frank, you're a brave man to try this. I can't wait to see your finished painting. Great idea to change the paints to black and white so you can see the values. Probably be a long time before I would try this, I'm struggling along when I can pick and choose my paints, lol. Barb

Hi Barb. I'm sure you could handle it. You learn a LOT about mixing color like this too.
I'll have the painting up in the morning.
Thanks for checking in.

Great lines:
"They all stink. Throw out your greens and just mix them." Amen! Mixing greens is the only way to go.

"Terre Verte is stupid." Best line from any blog I've read lately. Some colors are just stupid. And I would throw cerulean blue in there with the stupid colors. It's just shy of being completely worthless.

I love seeing all of these challenges you give yourself.

Hi Colin, I am glad you liked my take on greens. I can mix almost any green I can buy.
I wasn't sure whether to put the part about the stupid colors, but I said it to myself, so I thought I should write it. The cerulean was good for tinting my yellow. That's not hard to do. Some people like it, but I can't really find a use for it except in a situation like this. I guess that's why these colors were stashed away in my old paint box.

I like viridian, but agree on the rest of the greens. Can't wait to see your "crap shoot" painting, Frank.

Hi Jack. I can mix a pretty good viridian from my phthalo blue and lemon yellow. I know a lot of people like it.
I have the finished piece up now. What do you say, want to try one?

The "value board" is awesome! I'm going to re-read your posts on value and do some of those for sure. Thanks for the mention, and for demonstrating this so beautifully. Of course, I have some of those same stupid greens in my box of old paint. :P

Thanks Kathryn. This value board is a little different than the other. I was mixing to see what these colors could do and I tried to put them next to their correct value. The other one evolved over time from leftover paint, and for some reason I arranged the values backwards. I guess when I started it I was not thinking where it would lead.
They are great for learning to mix. The thing I like best about them is trying to SEE the actual value. Chroma can be such a tricky coyote when it comes to seeing value properly.

Hi Frank, I always read your comments over at Eric's blog and have been visiting your blog for sometime now. Have to say that your work is amazing!

This post is wonderful. The exercise to try and use a limited and odd palette, trying to stay away from our usual colors, is very hard. But I think really useful. I'm sure you discovered new colors that can set a whole new palette of feelings and moods.
I find that the more limited we are the more creative we get.

I laughed so hard with "Terre Verte is stupid" Ha! that still makes me laugh while I'm typing... :o) There should be a T-shirt with that printed on.

love the value board frank! i can't believe you did it, that would have took me forever, i obsess too much. still a great and useful exercise. i'm in awe of what you came up with using 5 all but crappy colors. like everyone else, i'm with you on mixing the greens.

Hi Christine, thanks a lot.
The reason I like the value boards and not "charts" is just for that reason. You dont get all obsesive, it's just for fun.
Actually it was just four colors, because Purple Lake was all dried out.

I just love the way this looks.
I've never fallen prey to tube greens. Recently I tried to eliminate viridian, thinking thalo blue and yellow would recreate it, but it wasn't the same. Also, I recently squeezed out some very old Cerulean to find that I don't really like it and can use other colors to get the same result.
I do like the Cerulean in watercolor. It has a slight opacity and a is lovely sky color.
Interesting stuff here. I'm enjoying it.

Thanks Mary. Which yellow did you put with phthalo blue to mix the veridian?

Hi Frank,
If you could hear me laugh when I read about your grab bag challenge, it really hit home. I have quite a collection of oils that have never been opened..ones that other well known artists insist are "musts". Terre Verte is one, and for some reason I have two tubes of it, both unused. Then there is transparent yellow, and I've never been able to make use of English Red preferring Burnt Sienna now and then. My painting really took off when I started using a limited palette and mixing my greens. Value is the key, color second. But, sucker that I am I still get tempted by the luscious names paint mfg's give colors. Now, with your grab bag idea these old unused colors may get a brief showing on my palette? Or maybe not? Love your paintings, as always.

Oh, is that who was just laughing?
These grab bags have really been a fun challenge. My comment on Terre Verte seems to have made more than a few people chuckle. I was on Deborah Paris' blog yesterday and she swears by it for its transparency. So there you go. One mans trash is another mans treasure.
It is a good way to use up some old paints, and a good way to get out of the box on color. I am a limited palette guy, and have used the same colors for a long time. I am good at mixing with them and can quickly get the color I need. It has been good for me to push that a bit.
I'd love to see you try a grab bag on one of your paintings.

Great blog Frank... I have a lot of catch up reading to do here.

I've never used Terre Verte but I can think of few other art materials that deserve some name calling:)!

Hi Justin. Thanks for dropping by.

I ceased leaving comments during your vacation when I realized you were immersed in vacationland and not checking in on the blog - didn't want to overwhelm you, since you are so generous to always respond to everyone.

BUT, I didn't stop going to different pages or favorite pages or your main website...just didn't bore you with comments every day.

THIS post has been one of my favorites - that turning the palette to black and white to see the values, not just eyeballing it.....wonderful. I'm not sure why, but this sticks with me and I think about it a lot. ---the truth underneath the potentially deceptive appearance, perhaps.
Thanks.
Solveg

I don't mind all the comments Solveg. I kind of missed getting a bunch of mail while I was on vacation.
I wasn't signed up to receive responses to anyone's posts and I did not make any, but I still had over 1,000 emails in my box when I got home.