Another piece in the show at Addison Art Gallery

"The Richard and Arnold" is another Eastern-rig in Provincetown. This painting is also in the Creative Convergence show at the Addison Art Gallery in Orleans, MA.
Most of the paintings from all of the artists are at the gallery now and will hang from this weekend through Feb.
The reception at the gallery is on Feb 19th., but get over there now to check it all out before too many of them sell and are taken down.

I started this painting on location and finished it in the studio.
It was a fun morning with lots of laughs. Part of the fun on these painting trips is just getting to hang out with a bunch of good friends who paint. Jerome, Peter, Colin and I set up pretty close together on this morning, mostly so we could talk about art and crack jokes. Logan came over after a while too as I remember. A good time was had even though it was a pretty chilly morning out there on the wharf with the wind blowing and we were in the shade.

I concentrated on getting my design locked in first, then worked on painting the boat, pier and light and shadow while I could. The morning light falling on the green net and along the lines of the cabin and bow of the boat was what attracted me, so I wanted to make sure I got all of that down first. There was even a guy on deck working, so I added him in for a sense of scale and interest. I left most of the water, sky and background for later. I mixed up a few color notes for those areas while on the spot. Then used those reminders plus a photo reference to finish this one up after I got home. 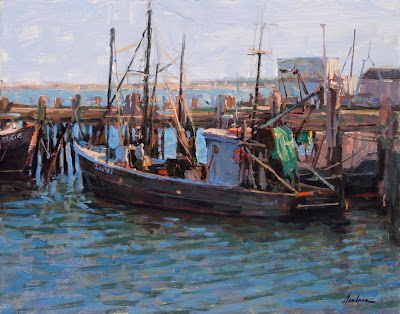 This is a really nice painting. There's a lot of detail in it. I can't imagine how you managed to get the lines for the rigging and posts straight. I hope to come to the show in February. There will be lots of great artists there. A friend lives in Dennis and invited me to stay with her. Hope to see you and your art.

This is a really fantastic painting. You have captured the light in a marvelous way.

Hi Frank!... A great "combo" piece here! Shows the plein air solidness and colour... right across the board!

Great composition...."simply"... Beautiful! No other words can say more!

Good luck with the show part!~ You surely do have some excellent pieces to hang!

nice one frank! good luck on the show. sell em all. greetings from sunny key west. here for the winter. you going to the cape this year?

Wow! I love finding a great new painting blog. Your work is wonderful.

I am very pleased to find your blog, I am very impressed with your paintings. You have great compositions.