"Sunflower" - about editing my reference info

This painting is in the Creative Convergence show at the Addison Art Gallery in Orleans, MA. Jan 15 through Feb 28, 2011.
It is a group show of paintings by 18 artists that painted in Provincetown, MA for two weeks in October.
All but two of my pieces in this years show were painted entirely on location or at least a good part done on the spot and then later finished in the studio. I'd like to talk about one of my studio pieces in this post.

I'd like to share a little about how I took an OK reference photo and turned it into a painting that I could be really excited about.

One day while looking for a painting spot in Wellfleet, I came across a scene of a bike parked under a large sunflower. I didn't set up to paint it, but I felt like there was something very interesting about it, so I snapped a picture for later reference.

Once in a while I'll get a photo reference that has everything I need for a complete painting. Usually I don't and need to edit or combine images. This is a good example of the latter.

The first picture shows the scene as it was. Taken from across a parking lot. 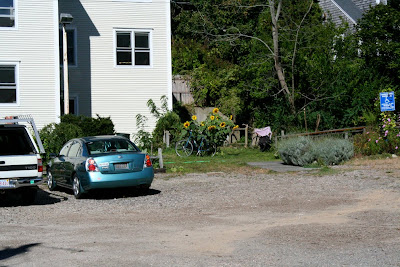 
I still thought it had great subject potential for a painting. So I opened it in photoshop and played around with cropping it into a better design, featuring the sunflower and bike. (below) 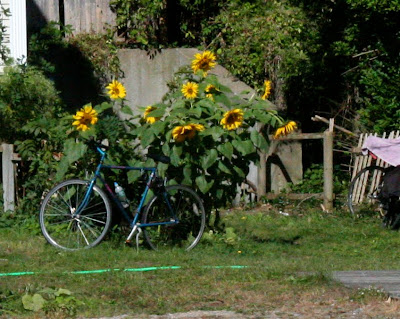 
I came up with a basic design that I thought looked pretty good. However, after zooming in, I realized that it was just a boring looking bike and it was facing left. I wanted it to face right, leading into the painting more. I decided to swap it out for a much cooler looking bike. The one I chose was a women's bike by Nirve called "Sunflower" of all things. The colors were just right for the painting and I really like the style of these "cruiser" bikes. There is a shop in PTown that sells them and it's where I first saw these awesome bikes.
It was all starting to fall into place for me. Provincetown is a great town for getting around on bikes and I think that was a big part of the inspiration for me with this painting. I wanted to capture that getting around by bike spirit that I was feeling during our stay. Maybe that is why this scene was calling to me.

Now it was just a matter of getting the painting to come together. I edited out a bunch of clutter to make the focus be on the large sunflower and bike. Everything else took on a supporting role or was eliminated. I also added some red into all the colors in this piece to warm it up a bit and neutralize all the green just a little. "smuggling red" as Stapleton Kearns, one of the painters on this trip, was fond of saying.

I really like how this one came out. I hope that you do too. 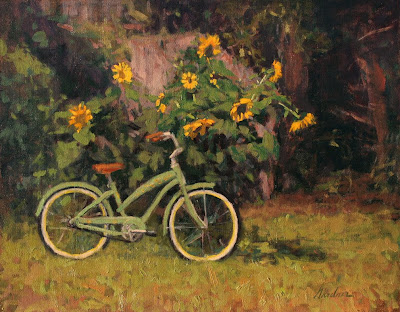 This is a wonderful painting Frank and a very helpful piece on editing for a successful composition. Thanks for posting this. Happy New Year! See you in 2011!

Great painting... But a good, informative post Frank! Those bikes were awesome.

Such an interesting post. I love reading about your thinking process.
I always love your work, Frank. I've got two of your minis to look at here in my office. Inspirational.

The painting is wonderful Frank! Thanks for sharing your process. Happy New Year to you!

Fantastic painting and I loved reading your process! Thanks for sharing that!

Great post and so useful to we inexperienced painters. Lovely picture.

Love the Cape, haven't been out to P.town
in a while- I had forgotten about bikes
out there...used to camp and wander,
so many good memories! Love the sunflowers, I think it is interesting you chose to have the bike be that
particular green-

Thanks Frank for giving us a peek into the creative brain synapses. The painting is a beautiful distillation of everything you do and know so well.
Wishing you a productive and inspired year ahead.
I can't wait for my very own " Gardner " to arrive from Randy.

Wonderful post, design is one of my challenges so it is great to follow your thought process for this painting. Beautiful painting!

Thanks Nancy. Happy New Year to you as well.

Thanks Marc. Need to get a few of those bikes. Cobblestones are harder to ride on though.

Hi Marian, thanks, glad you are enjoying the paintings.

You're welcome Barb, thanks for being a regular follower. Much success to you in 2011.

Hi Linda, Happy New year to you too.

Hi Mick, thanks. Glad to know that it was useful.

Hi Izzy, The outer Cape is a great place to wander around. I liked how it added another variation to the "green" palette of the painting. That model actually is that color green though. With the yellow and white side walls on the tires.

Hi Bonnie, you are welcome. A productive and inspired year to you too. Thanks for the purchase of that painting from Randy. Hope you enjoy it. There is much more to that little one when you can see it in person.

Hi Rhonda, thanks. So glad to know that a few people find my writings interesting.

Beautiful painting, Frank! Thanks for sharing your thought process on this. This is how an artist really puts himself into the painting, and makes it all his own.

I have done this a time or two. It feels like creating with a capitol "C"! Great fun!

Oh, I love how your painting came out. I love the process, too. Awesome!

I love this painting Frank. The greens are incredible - and I love the way the bike leads into that dark spot into - where? And it's wonderful hearing your decision-making process. I'm going to try to make it to the Cape to see the show this year.

Happy New Year to you as well Paz.
(who loves sunflowers)

Hi Suzanne, That would be great if you got down to see the shows. They actually are hanging from the 15th of this month, but there are receptions on Feb 18th ( Museum) and 19th.(Gallery)