An Inspiration for "Peregrinos"

"Peregrinos" is a painting featured in my one man show at M Gallery in Charleston, SC on Nov. 4th and 5th.

Peregrinos translates as pilgrims. The women in this painting are arriving at the Sanctuary of Atotonilco and are making their way over to the church. People come from different parts of México all throughout the year to spend a week in this well known sanctuary. I lived in this town for a few years so this is a very familiar scene to me. One of the ladies is ringing a brass bell and the rest are singing. The town was also celebrating it's yearly festival on this day and that is why they are setting up the large fireworks tower to the right. It fit in with my design and feeling of México, so I used it.

This design in particular painting was influenced by an "Orientalist" painting titled "Pilgrims Going to Mecca" by Léon Belly. The obvious similarity is that both paintings feature a pilgrimage. The design I used is very similar to the way Belly grouped the procession of pilgrims into one large mass. In his painting, several of the pilgrims were on camels, which gave the design some height. The banners that these ladies were carrying reminded me of that design shape. The setting is different, but the overall feeling of this composition and subject is rooted in what I loved about the Belly painting of 1861. 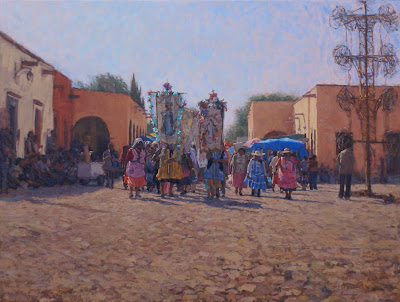 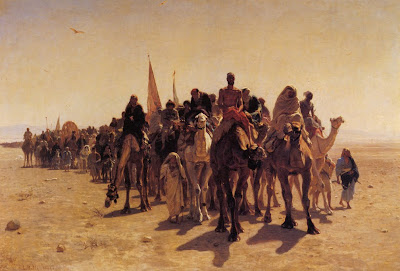 A few years ago I bought a book called "The Orientalists, Western artists in Arabia, The Sahara, Persia and India". It is a wonderful book that I highly recommend. I believe it's out of print, looked it up on Amazon and they are starting at around $740. Ouch.


Below is a 6x8 painting "Peregrinos" that I used as a color study and composition sketch when I was planning out the larger version. I've also included two details from the larger painting. 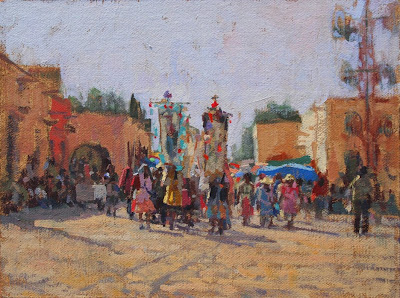 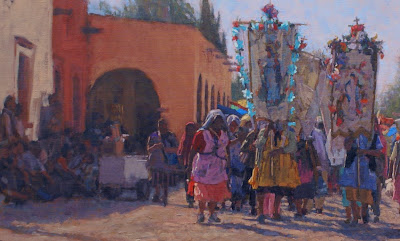 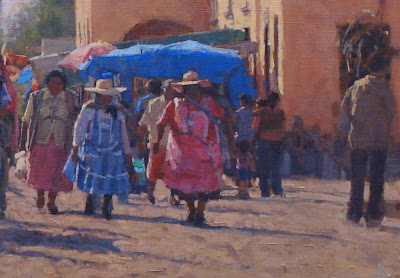 This is a beautiful painting but why did you plop the focal point right in the middle of the canvas?

Thanks, I placed it there because I liked how it worked in the overall design there. Or are you talking about the Belly? Because it worked amazingly well for him too.

awesome painting Frank! I love it!!

really cool painting, Frank. Thanks for explaining the inspiration for this. I'm glad you "plopped" the focal point in the middle. It works really well.
I love it.

What a FABULOUS post. And I really LOVE that painting.... It just sings.
I liked learning about what influenced you as well as seeing your painting again. It's very very special!

Frank, really great work on the large Peregrinos. The texture on the road is beautifully painted.

Thanks for the detail shot Frank, I think that price should be just to look at it... Great piece!!!

Thanks Robin, yes, love it out there. One of the reasons I fell in love with Mexico.

Wish I had more time ( and patience) for writing stuff like this Kyle. There are a lot of pics of Belly's sketches for that painting in the book too.
Glad you like the design. I did not actually look at the Belly piece while painting this, but the placement of the design is very similar.

Thanks Silvina, I've gotten several compliments on the road. It was actually harder to get the way I wanted it than the figures.

Thanks Dan, I wish.

I know your show was successful. I hope I get to see at least one of your paintings over Thanksgiving in Charleston! Does Your gallery in Mexico have a web site?

The show will hang through the end of the month. Should be at least one left by then. : )
I don't have a page for the gallery. Just my work that is here on my web site under "paintings' then "Galeria Gardner" we are going to get a site for the gallery going soon now that I have some Colin Page, Marc Hanson, Scott Burdick, Logan Hagege, Carol Marine and Guy Corriero paintings.