I spent the morning painting at Rancho del Sol Dorado the other day. I worked on two paintings. A landscape that I am doing some adjustment on in the studio and this painting of a horse that was tied up down at the stables. His name is Ben. Even though he was tied up I knew that he would be moving around on me and the background would stay the same. So as soon as I had my composition drawn in lightly I sketched in Ben while he was in the position that I wanted. He backed out into the sun and never went back to the original spot. Glad I sketched him in first. I had taken a photo that I later used to check my drawing of the horse. I only had to adjust the spacing between his front and back legs just a bit. 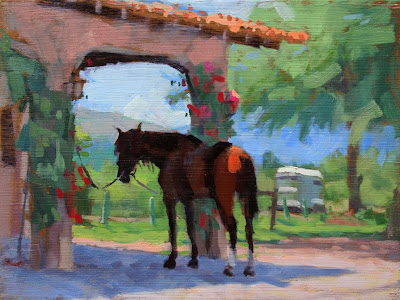 Love that little spot of sunlight on his butt!!

Me too, but I was also going to say rear end! Love the way you get that wonderful play between light and shadow - it's magnificent.

Yes, the light on his gluteus maximus makes this lovely painting.

Great, now I can be redundant AND repetitious by saying that I love the hot spot of sun on the hiney. ( most of the other nouns were already taken ...)

Had you any idea that this one brush stroke would be the topic of your first 5 comments?

It's the first thing I fell in love with, after Bens' stance.

What a great painting this is Frank.

Thanks to all of you. I never ever thought that I would be getting comments like, " I like the way you handled his ass."
Gosh.
You see the power of putting on a stroke and leaving it alone?

Hi Frank!....Guess I'll follow the crowd ...and make an "ass" of myself by noting that "red flag" on his flank!

Not only leaving the stroke alone...but the thoughtfully pinning it there strategically... for the effect you have most certainly achieved!
Bravo! Another winner!
Cheers!
Bruce

An enticing design. In an effort to be original I won't mention that spot of light.

I really like how you take a typical scene and emphasize the beauty that is not always evident to the average passerby. For example, the sunlight on the keister!!!!

I said it already:
Perfect.

Hi Paula. That's one of my jobs. Pointing out the beauty that is not always evident to the average passerby.

...Girl On A Burro...made me come back and look at Ben again. So bright, these two paintings, and there's none of the usual manner of making things bright in them. I love that!!!
They are so beautiful.
Thank you.
Solveg

I love his 'ride' in the background :D

I liked that too Mary and had to include it.