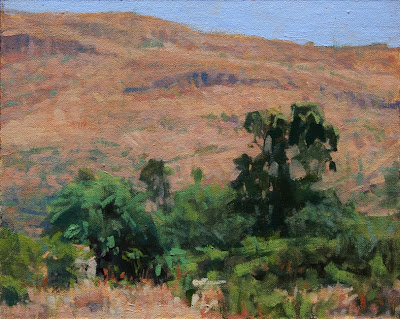 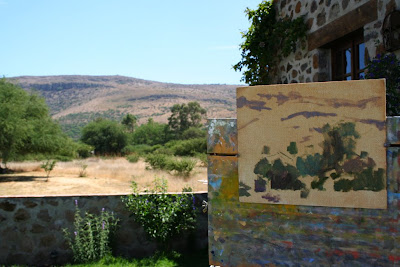 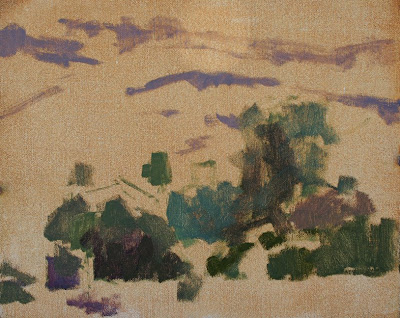 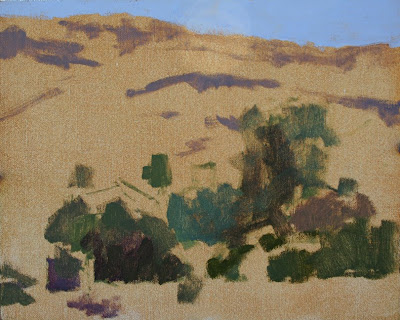 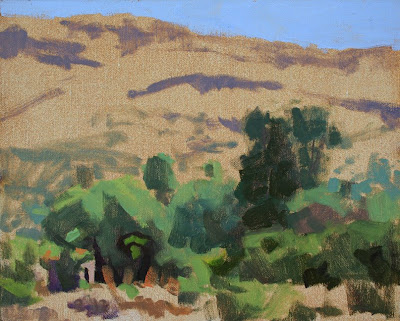 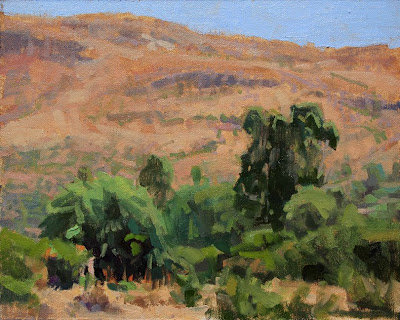 Really graceful demo Frank! I can feel the heat of the afternoon in your work.

Little? There's not a thing about this other than size, perhaps, that's little.
You've captured the activity of trees' movement with your brushwork against the stillness of the distant hills in the sunlight.
Those dark areas in front pull us right into the canvas.
What is consistent in your work is how every stroke is intentional. Like a diamond cutter.
Mexico ought to be paying you a stipend for increased tourism.

I love the deep shadows in your tree.
I am constantly amazed at how much you (YOU) can convey with such graceful beautiful brushwork.

I wanna come back!!

Beautiful little painting. The light and temperature of the day is palpable.

Oh my goodness love your little painting Frank! Looks so real too... something about the values... Beautiful amigo! :o)

Beautiful stuff, Frank! The demo is much appreciated!

Hi Bonnie. Well, you know, I had to call it something.
Thanks, I'm glad you like the brushwork in the trees. My favorite is the big one on the right.
Stipend.... your funny. LOL

Thanks Dan. Beats a grounder any day. I was pretty happy with this one. I was talking along the way and giving assistance, so I am surprised I stayed focused enough to pull it off as nicely.

Thanks Marian. I wish you were back. It was fun painting with you and would love to again sometime. I was out at the ranch painting today. Beautiful weather, you would have enjoyed it.

Ali, amiga, como has estado? Thanks!!!

Thanks Dean. Glad you are not bored of the demos yet. They are fun to put together. Just take a little longer to work into a post.

Thanks Jerry. It's been a while since I have seen a post from you. Been painting?

Hi Frank, Yes, I have been painting--look for a post shortly. Been on an intensive self-study course on color--lots to share.

Frank--these are always very helpful. I'll be able to get out soon, and your hints are in the nick of time. Have been re-reading Gruppe lately and it's surprising how much of earlier readings I have forgotten. The force of habit is very strong, so it doesn't hurt to keep starting at the beginning, a purpose your demos serve well.

excellent work Frank. You have gotten a really nice feel to this piece. Love your work

It really came out beautiful.

What a beautiful painting!
And thanks for sharing your process.
I'll be following your blog.

So much light and movement in the trees.
Ah to paint in the fresh air.
Sorry to have been gone ages.......
but wonderful to see your work again.

I'll be looking for it Jerry.

Hi Jack! Good. Yeah, re read those Gruppe books as often as you can.

Hey there Bill, thanks!

Hi Peter, thanks and thanks for following the blog.

Hi Elizabeth, Thanks. Yeah, fresh air is good, and even better if I am out painting in it.
Don't apologize for being away, I have not been around visiting my friends blogs that often lately either. Good to hear from you.

Beautiful and the demo is very full of information, I can't believe how much I learn from these, Thanks Frank