I started this landscape the other day. Jerome and I painted in this spot for about two hours or so before the light shifted. I was looking toward the sun and it moved from my left to right. The fastest changing light was on the large tree. Once the light on the tree changed, I concentrated on adjusting the drawing and color of the background mountains.
Below is a photo of the block in. I did this part as quickly as I could. At this stage I am just trying to get the drawing roughed in and start to adjust the values of the masses in relationship to each other. 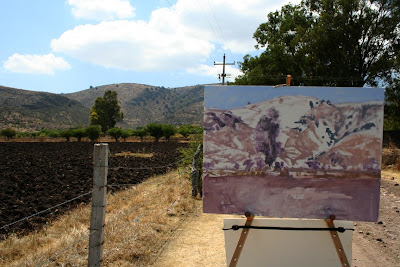 
Below is a photo of the painting as it was when we wrapped up to move on to another location. Notice how much the light on that large tree has changed from one photo to the next. 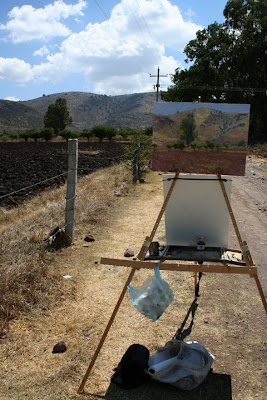 
Today I had a chance to work on the painting some more while I was at my gallery. I took a lot of photos along the way so I could share some of them here and talk about a few of the adjustments that I made.

If this blow by blow is going to bore you, feel free to just scroll down to the bottom to see how I left the painting when I closed up shop for lunch. However, I hope there are several of you who will be interested in seeing and reading about how I went about making some changes.

A priority for me is that I want to maintain the freshness of the on the spot brushwork. So, to try and keep as much of the good stuff as possible, I really take some time and think about what the most important changes should be before starting to make any adjustments. Most of the color is pretty accurate for a start, but there are a lot of subtle colors out there, and in this case, the best way to get them is to layer more color on top of what I started with and let the eye blend them.

Below is a picture of how the painting looked before I did any retouching on it. 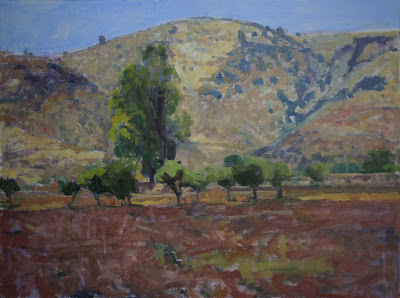 One main issue I want to tackle is the width of the large tree, so I put a few spots of color down to mark that adjustment (b). I also want to move the three trees on the right side of the middle ground. I think they will give a better balance to the piece as a whole if I shift them slightly to the right. I thought it might be interesting to show how I used a light touch to do that, so there are before (a), during (b), and after (c) shots where you can see how I mark in the new trunks. Then I lightly paint over the old ones. I am beginning to build up some broken brushwork there, and you wont even be able to notice that they were shifted by the time the painting is done. 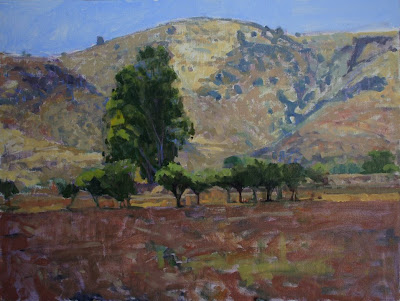 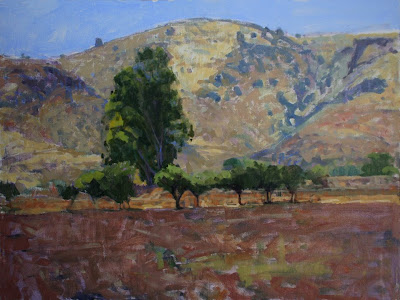 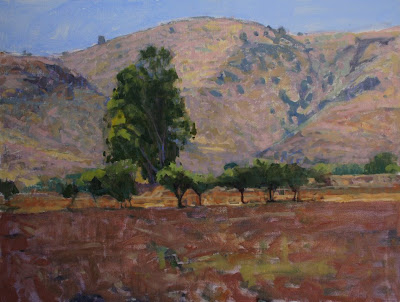 Another rather important adjustment I wanted to make was to shrink the size of one of the distant trees. It is right at the base of the mountain just about in the middle of the painting ( to the right of the large tree ). In (c) it is rather large, and you can see in (d) that I reduced it by about half it's size and moved it slightly lower and to the left. I think it gives the illusion of depth better by being a bit smaller than what I had painted at first glance. On the spot you can stare at something so long that it becomes bigger than it really is.
I also started to add some light purple tones into the mountain side, and that begins to even them out a bit.

One element of the scene that I really liked was a patch of light green grass in the middle of the freshly plowed black earth. (There is a guide wire to a electric pole that comes down there and they could not plow through it.) It broke up the large area of dirt nicely.
I had been thinking about introducing a few sheep into that area to give added interest and a foreground element. Some sheep were wandering around while we painted and that is what gave me the idea.
I painted in 5 sheep initially (e). I really liked the way the two on the right came out, so it was kind of hard to wipe them off. I thought it was too much and they were drawing me to the right too much so maybe just three would look better. I wiped them off while they were still wet because I wanted to keep the fresh blocked in look of the field. I can always paint them back in later if I decide that I liked it better with 5. I am starting to add in some darks into the field as well. That black dirt turns up some hard clumps when plowed and I want to get a bit of that in the foreground without going overboard. 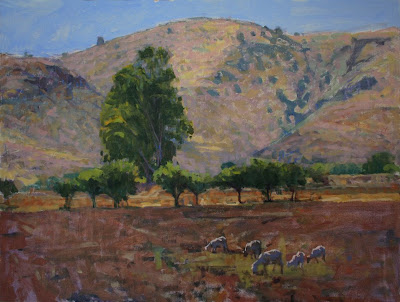 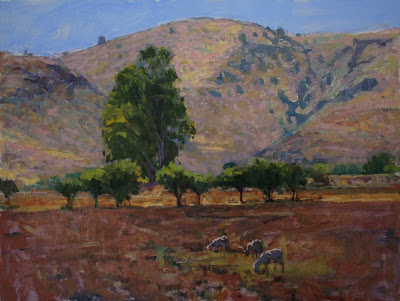 This is how I left off for now. I have a few things in mind, but I don't want to overdo it. I'll probably wait a day or two before I do any more painting on this one.
I also took some close up shots of how I went about painting the sheep. Check back in a day or two to see those. Too much loaded into this post already.
Thanks for reading!
Posted by Frank Gardner at Tuesday, March 31, 2009

Hey Frank, Is it me or does it look like the large tree could be teaching a class to the little trees? A workshop maybe? Its great and I really enjoy the subtle color variations on the side of the mountain. Beautifully done.

Frank, Really strong composition and sense of atmosphere/light. Thanks for including the complete description of your process. Steve

nice post frank, like that you showed all of the different stages and shared your thoughts. good to know you work for some of your masterpieces...LOL lots of wonderful color in this one.

Love the sheep. They are great. The light on them makes the whole pntng more crisp. Nice work, and nice of you to write up your process.

Hey Dan, I guess that's just you. LOL
I am just in the workshop state of mind I suppose.
Trying to show how to take a piece started on location just one step further without losing the fresh spontaneous stuff.
Glad you can see those colors in such a small image. There is some nice impressionistic broken color starting to happen there.

Thanks Steve. Glad you like the composition.
Hope the description is not too confusing. I was rushing to get the post up before I fell asleep.

Hi Christine. Thanks. I tried hard not to ramble on too much. Yeah, even I have to work at it once in a while.

Thanks Colin. I was concerned that the sheep might take away from the whole, but as soon as I laid the first highlight on there I knew it was a good choice.
I'll try and get a post of how I painted the sheep on here tonight. Gotta go out and paint right now.

Thanks again Frank for taking the time to teach us about how you make those beautiful paintings.
I saw this post yesterday on my sidebar but you must have taken it down because when I clicked on it, nothing was there.

It was worth the wait. So interesting to read about the thought processes involved in the composition and planning.

Hi Marian. I feel so stupid about that. I was just getting the post together and double clicked on the title or something and it published. Must have done it three times.
Thanks for reading through the whole thing.

Thanks for all the photos and explanations. It's a mini-lesson and allows us to see some of your steps. I really like the sunlight on the sheep.

Thank you so much for sharing your thought process, and showing each step as you shift and adjust to strengthen the painting. I really love seeing the scene beyond your easel, and following the progression to finished painting. You never lost your first impressions of the light--just improved things. Wow!!

I also thank you for your generous explanations. What makes reading about the process so enjoyable? Maybe it isn't for many. But I've always gone in for process over product, in dance especially.

Hi Frank, please pick up an award for your blog from mine. You certainly have a passion for painting. This is a very informative posting, lovely colours and composition here. Thank you.
I saw you in 'International Artist' magazine, looked like you had a great time.

Marvellous demo, you have done us all a favour in describing your thought process as well as showing us the pictorial development. Thanks.

Carolann, thanks for the award. I have another of those that I need to respond to as well.

Like the loose brush work in the field. Not overworked. Good job.

Thank you so much for the very valueable lesson!

I liked watching the evolution of the light section in the mountains! And, of course I like sheep. I liked the five enthusiastically, but I prefer the three in the context of the painting.
: )
It's amazing how that change alters the sound of the painting. With five, it's more lush - I hear activity and insects and stuff. With three, it's very quiet. And I look more - deeper. My ears have to listen, too. I like it.

I also really like how the eye comes down that blue valley of green to the sheep and then back up to the trees (or distant vague objects) atop the mountain on the left side. ...with a rich tree-growing "oasis" along the way.

You are very welcome Bill. Thanks for the visit.

Solveg, I'm glad that you like it. I thought it was getting a little busy with all five.
Nice that you picked up on that valley. I really worked hard to get the feel of the way the trees lead down that area.

thats a beautiful painting. i thought you should have left it how it was when you stopped painting it at the site, but as it progressed i became more impressed with it.

Thanks for commenting Mike.