This is one of the paintings that I posted during my painting trip. It is one of the ones that needed a little adjustment back in the studio. The rigging on the boats was slightly off, especially that one line on the left that was curving up when it should have gone straight or curved slightly in from the weight. The only other change was to darken the values of the shadow sides just a bit. You can tell if you look at the distant water between the two boats. That value stayed the same.
The color in the photo of the finished painting is more accurate as well.
I am much happier with the finished piece.
I'll re post how it looked when I stopped work on the dock, as well as the set up, so you can compare the two. 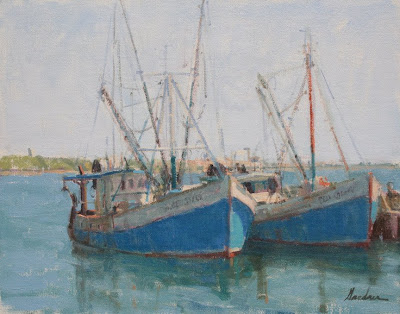 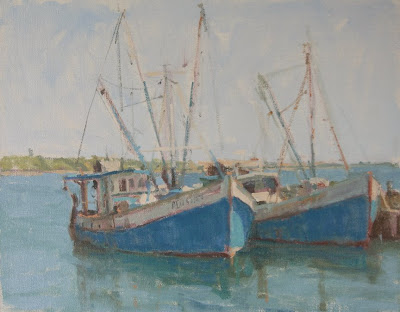 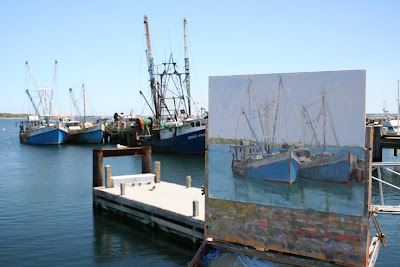 The set up on the docks in Provincetown.

It was real fun painting out on the pier in Provincetown. It is amazing how fast the tide makes the boats go up and down.
The other great thing about painting boats is that they usually have names that make for good titles and I don't have to struggle too hard to come up with one. Yes, they are called the Blue Skies and the Blue Ocean.
Posted by Frank Gardner at Thursday, June 12, 2008

2nd version mo bettah, Frank. Did you do what I usually do and finish it off later inside after a thorough evaluation of what you did outside?

Perfect name. I really am liking these two blue boats. Blue sky's. So much blue, yet not to blue. Did that make since?amy

This is a lovely painting, Frank--it definitely has that "wow" factor. You are quite the draftsman as well as painter-very inspirational.
Faye

Hi David. Thanks!
Yes, I stopped this one when the light changed too much and moved on to another. I knew that line would need to be fixed, but only after the other paint had dried a bit.
Back in Peter's studio I was able to adjust. The values bugged me a bit. I knew the flat plane of the water needed to be lighter than the upright boat, even the white part in shadow, but it was not reading right. Darkening that up just a bit really helped. Then with the help of the photo I made a few changes is the rigging that needed to be tweaked.

Hi Amy, thanks. Yeah, I think I know what you mean.

There are so many blues in that painting that the names of the boats could not have been any better.

Thanks Faye. I really appreciate that. My friends that paint boats all the time thought that I did a pretty good job on the drawing too.
Must be all of those Gruppe books.

i really liked the first version, until i saw the second and can see the improvements you made..the darker shadows really make the boats stand out from all the blue water, sky etc. . even though you decided to make changes, overall i am really impressed with how you really captured it on site. how long did you take on this one on the pier?

Hi Christine. I liked what I came away with too, but I just could not let it sit knowing I had a few things wrong.
There was probably about an hour and a half on location. Less than two for sure. I don't really keep track usually. Time flies when your having fun.
Spent about 30 minutes correcting stuff later, but taking my time. The pace slows down then. Did not want to add any more than I really needed to and did not want to ruin it. It was more like, add a few lines and think about it.

Good to see you back, Frank. I love the shot of your easel and subject matter together.
Similar to Christine, I thought the first version right on, but agree that the painting improved with the tweaking you did. I do envy you the trip to Ptown, so it's good to see your wonderful paintings of the place.

Thanks for sharing the process on your blog!

Another great painting, Frank. All of your improvements were "right on". Perfect o!

Frank, I scrolled back and forth and the improvements you made do make a difference. What a beautiful place to paint. Thank you for keeping a watchful eye on me, I appreciate your input so much. Barb

Thank you Don. I think I may attempt an afternoon shot of the same boats from a photo.

Hi Susan. I could have gotten away with leaving it, but I knew I could make it a little better with just a few touches.
Ptown was great. We were going to go back up and spend the day again, but the rains set in.

Hi Liz, thanks for leaving a comment. I've noted your blog and will take a better look when I get the chance.

Thanks a lot Dean.

I'm assuming it's Bill, thanks. It is large for me plein air, but I want to try larger. I think my brushwork would have more room on a larger size. I'm hoping to get the nerve up to try a 24x30 someday.

Hi Barb. It is a pretty great painting spot. We were further on down the dock too. There is a lot going on out on the pier. I could spend a lot of time there.

What a draftsman you are. I would really love to see any drawings you've done recently, I bet they're fantastic. This is a lovely painting.

blimey frank your output is phenomenal and i'm not only speaking about the quantity
those boats are wonderful the blue is eyecatching,such fine detail without loosing the overall plot/light,a delight to see

I'm noticing that you keep the values higher in places than you might actually see them. Like between the boats I see a deep shadow, but you painted it lighter. Is this a conscious choice? Maybe part of your style? Or maybe it was that way in person.

Gosh Ambera, thanks. I really don't draw enough pencil or charcoal stuff. I draw with the paint though.
Maybe it is time to show a few drawings again.

Thanks Rob, I appreciate your visit. Isn't all that blue fantastic? The names of the boats were just too perfect.

Thanks Silvina.
Yes, I try and keep my shadows light. It actually was lighter than what you see in the photo.
I just posted another piece with thoughts on painting from photos.
You may be right, there may have been a darker part there. When I look at the photo I see it. What I remember about painting the scene is that there was a lot of reflected light bouncing back toward that boat, so that is probably why it looks like that. It may just be the moment I shot the photo was later than the time of most of the painting. Maybe I just missed that. The shadow on the boats was lighter than the shadow they cast on the water. I tried to stick to that.
I DO try and keep my shadows as light as I can. I want to be able to see into them. I think it is a mistake that I used to make a lot working from photos. I made all my shadows too dark.

Frank--I like this the best of this couple of week's group of Cape paintings. The finished version is just perfect--Gruppe would be proud. (I like the earlier marsh painting, too, but as usual find all your work here instructive and inspiring).
Thanks for your comments about shadows, too. I have to force myself to remember that shadows don't have to be so dark.

Thanks Jack. I like to think that Gruppe would be proud, but you know that he would have done it on a 24" x 30" in about the same amount of time.

Yeah, shadows should not go too dark.